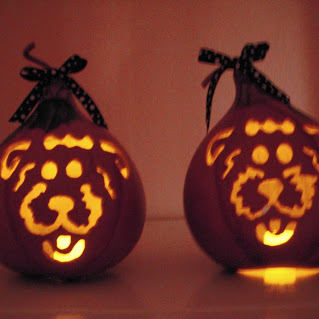 We saw these pumpkin carvings in the Airedale and Welsh Terrier community on Google + and had to share. There is information about how the template was created and the eHow.com site that provides more details. Check out the comments on the photo to get the URL if you want to create one of your own. https://plus.google.com/u/0/communities/101314266892737860742

Happy Tales!
Posted by Unknown at 10:33 AM No comments:

Happy Tales!
Posted by Unknown at 7:14 PM No comments:

Rewind to the spring of 2013, before Murphy joined us. We caught sight of a LARGE opossum early one morning in our yard. Sophie gave chase and briefly caught it before dropping it. We bought a humane trap and after a couple of nights, we had the mother opossum, but a baby was clinging to the outside of the trap. Opossum, as a rule, are nasty, but "Little Jimmy" was kind of cute. I caught the tail end of that incident (pardon the pun) as MacGyver managed to race in the door, yell upstairs to me, grabbed a net and an empty ash bucket and shot back out the door. (See why I call him MacGyver?) Little Jimmy was gone! I am sure that his mother told him to "Run, save yourself, it's too late for me now!"

Fast forward to August 18, 2013, Murphy's sixth week anniversary with us and what an anniversary!! Due to our schedules, we generally walk our dogs early in the  morning. That Sunday was no exception with a 6 am wake up call and it was raining! It was very dark because of the rain. Murphy shot out the door as usual but was not seen or heard from for several minutes. Murphy is a large dog and usually we can keep track of him by sound. He did not come when called and so MacGyver was dispatched to investigate. Then I heard, "Come see this!" I knew it was not pretty. I refused to go any closer, which was a very healthy distance away. It was Little Jimmy. What if Jimmy was "playing opossum" and decided to end the game when I took hold of the flashlight? It was indeed Little Jimmy who Murphy had quietly and quickly dispatched to the "other side." MacGyver, once again was left with the dirty work of shoveling up Little Jimmy, who was now medium sized Jimmy, and putting him in the trashcan. When I took a bag of trash out later in the day, I confess I banged on the trashcan lid first and got the bag in the can as quickly as possible.

Sophie gave Murphy wide berth on our walk that morning. Must have been the opossum breath. Right now, it's all quiet at the OK Corral.There's a new sheriff in town and he ain't playing opossum!

Here is "the sheriff", taking a nap after getting the opossum.

Happy tales to you!
Posted by Unknown at 4:58 PM No comments:

Murphy a.k.a. Sir Ian Murphy, Big Wubba, is a love bug. He is motivated by play and loves a good belly scratch. Food has little appeal for him. We spent the first 10 days trying to find a combination of food that he would eat. He now eats the same kibble as Sophie made into a stew with water and 2 Tablespoons of canned food. Salmon is his preference. He is eating like a champ now; after getting used to a feeding schedule of twice a day vs. grazing all day and a little cat food to snack on too.

Initially there was some resistance to his crate. We had to de-sensitize him and remind him that his crate is a safe place. He does well if he has a chuck it ball in the crate with him. It serves as a pacifier for him and calms him. He usually has a ball in his mouth as you see in the pictures that follow. He loves to retrieve the chuck it balls. He gets so excited that his teeth actually chatter, as if he was cold. He is learning to trust that we will throw for him if he "drops" the ball he is holding and sits down. That is very hard for him. He left his previous home with nothing and I often think he probably left behind some favorite toys.

He likes the ocean and bites the water as it comes in close to his feet. He loves to smell the shells and is always interested in seeing what people are collecting.

He is a night owl. He loved letting us know the paper had been delivered with a loud bark at 4 am. We had to barricade our bedroom entrance to keep him contained. He remains a restless sleeper and he "talks" in his sleep, but he is beginning to sleep for longer periods at night now and is not wandering around as much.

Murphy has interesting toileting habits. He prefers to poop in bushes. Finding bushes tall enough for him on our walks is a challenge for him; gathering the poops up for disposal is a bigger challenge for his humans. There is not a shrub in our back yard that he has not run into, over or through. He has pooped in almost all of them and has a few select favorites. He is learning to potty on command and will go for us about 60% of the time with more than one reminder. He is easily distracted from the mission by numerous smells that have to be processed and investigated!

It is obvious that he was cared for by his previous family. We so appreciate that and that they cared enough to send him to rescue and then to be with us. We are sure that his crazy antics will continue to brighten our days!

Look at that magnificent tail! I forgot to mention that his tail is not docked! It is quite the conversation starter! 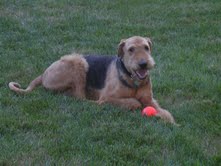 Murphy and The Boy, one of Murphy's  favorite people